ML and AI is in many ways making life interesting, less of a hassle and businesses effective (just what they need to be). This note looks at the pervasiveness of applications on a day-to-day basis.

How should one respond to a disclosure? It may just depend on which end of the disclosure one is at. And that seems to be quite the dilemma around ML & AI news that now finds our way more often. And yet, many of its applications have already become part of our lives without so much as a knock.

Take the Smart Labels that Gmail introduced way back in 2011. Prior to it, all of the marketing, promotional & newsletter mail made it to your main inbox & needed either constant spam marking or deletion to just be on top of important mails. Like the ML behind spam filters, this also learns over time to keep your primary inbox focused on mails you are most likely to act one. Smart Reply for the Inbox app came in 2015, offering suggestions on quick replies to your messages, which was extended to Gmail on Android & iOS in 2017. Is this popular? A Google blog states this as driving 12% of replies in Inbox on mobile!

And then there are the virtual assistants on phone from Apple, Google, Samsung & other driving the voice search market used to do an array of tasks from weather details to playing music to traffic status. Haven’t tried it yet? You will be surprised on how much it can accomplish (with fair accuracy) & become part of what do with your phone. What’s under it hood? An interplay of speech recognition, natural language processing & ML, among others. Popularity? Per a Verto analytics report, Siri led the pack in the US, with ~41 million unique monthly users in May 2017.

Google Maps, indispensible for its directions & traffic updates, uses it for suggesting places you search, finding routes, analyze submitted updated as well as getting new addresses. All of this keeps happening real-time in the background using AI techniques. Usage? Maps is pegged by Google to have crossed the 1 billion monthly user mark. And ML in its Translate product, which did a word & phrase translation & learning on the way, is now using neural machine translation to translate complete sentences (for more natural sounding translations) & to better the accuracy between two languages pairs without being taught prior to do so. Stats? 500 million+ people use it & together translate more than 100 billion words a day. And to top it, there is the Word Lens that uses your phone camera to translate street signs in 28 languages. 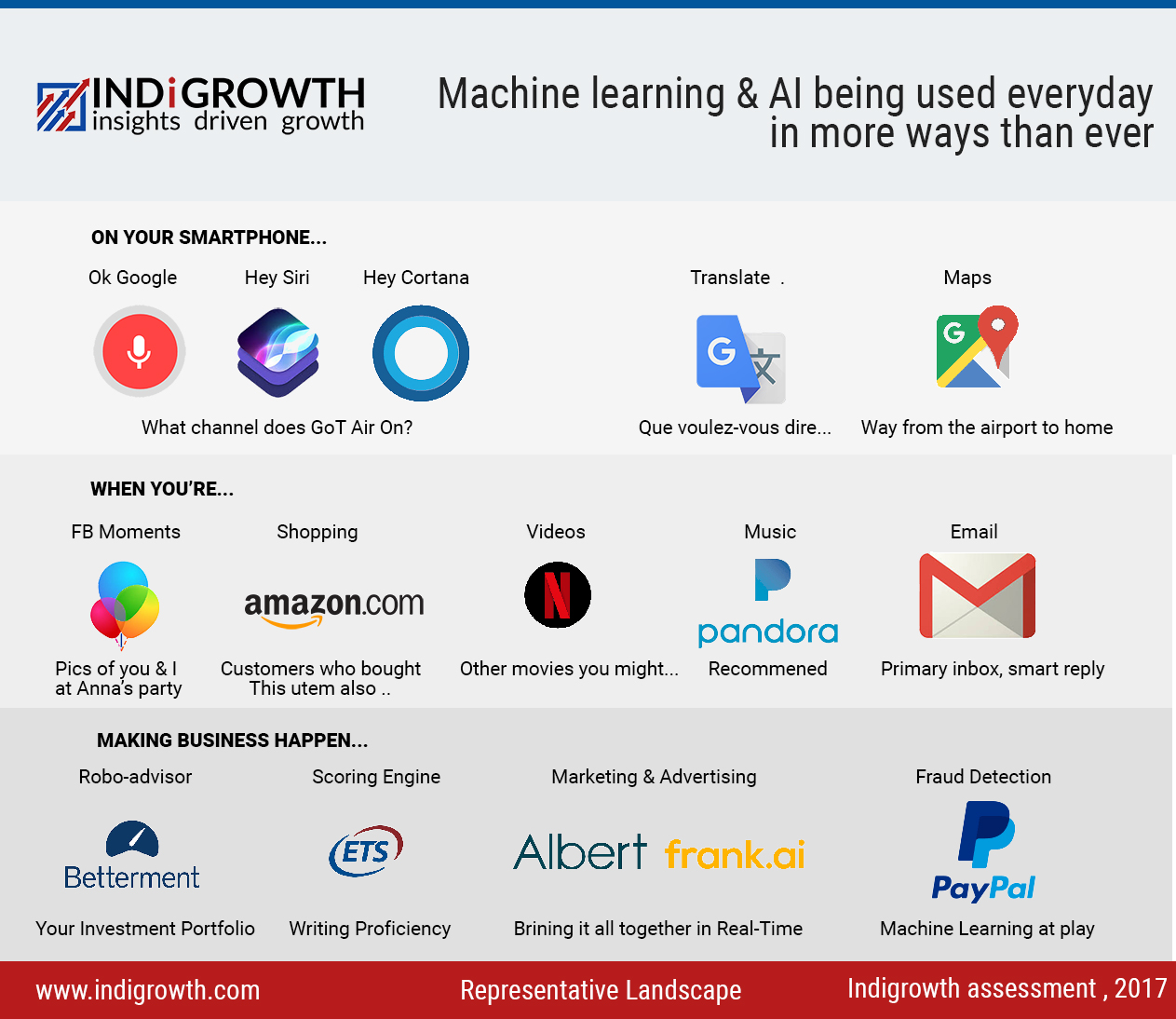 But, probably, one of the most powerful ways in which ML is generating business is the recommendation engine. Much has been documented about how Amazon & Netflix have built algorithms that make personalized product recommendations to users. How big is this? A 2013 article by McKinsey & Co. attributes the share of product recommendations at 35% of purchases on Amazon & 75% of what is viewed on Netflix. And that is what Pandora is doing to music by applying the trifecta of human music curators, data science & ML to its vast library under the Music Genome Project. Its Thumbprint Radio station provides each user with a personalized soundtrack.

And it’s not just the everyday shopping, entertainment & communications that ML is being used for. Consider Robo-adviser that uses ML to match investment options to client preferences & portfolio balancing later. How big is this? In July this year, Betterment, poster child of the Robo-advisor disruption, crossed $10 billion in AuM. Market forecasts are in excess of $2 trillion by 2020, with financial analyst regarding it as the single biggest impact factor for financial services in times ahead. And some of the other players, like PayPal, have been using ML for over a decade. Its predictive models have evolved over the years to using ML technologies that allows for pattern recognition across thousands of variable in an effort to detect fraud. Another organization, ETS (Educational Testing Service) has been using its E-rater product for automated scoring of essays since 1999 & is considered to use e-rater for over a million GRE essays every year as a check-score against the human score.

Equally interesting is the case of Albert and Frank. Both of which are AI-based platforms that are changing the way marketing & advertising have worked in past. Harley Davidson has increased its commitment to Albert by 10x post its first AI campaign in 2016. You may want to reach the HBR article on the AI advantage for Harley Davidson NYC.

And this sums up how ML & AI applications have already become part of our live. Some with gradual improvements & others with a bang as they proved their worth against KPIs.