As Poland works on its economic growth, it is focusing efforts on building the nation’s ICT sector. This note provides a view on Poland’s evolving technology play and the growing startup ecosystem.

Poland stands out in Europe for its economic stability, being the only big economy to avoid a recession in the financial crises year of 2008. It has since consistently grown at about 3% p.a. to become a $467 billion economy in 2016, with a per capita GDP in excess of USD 12,000 (the common benchmark being $15,000+ for being considered as an advanced economy, which Poland is expected to cross in the next decade) per the World Bank data and is counted alongside major economies like Britain, Germany and France.

The country increasingly finds itself on the radar for ICT companies, with majors like Google, SAP, Oracle, IBM and Microsoft having offices there. A young sector, the IT industry in Poland is on a growth path and estimated by PMR research to increase by 4.1% in 2016 to ~EUR 8 billion. A further growth of 5.5% is forecasted in 2017. Of this, services and software are expected to up their market share to 49% by 2019.

What is behind this growth? IT outsourcing, together with business support and shared services, continue to be one of Poland’s most dynamic success stories. It is estimated that the sector employs about 140,000 people across more than 450 outsourcing centers, supported by cities like Warsaw, Krakow, Lodz, Katowice and Wroclaw that offer a develop IT infrastructure.

A key driver of Polish IT attractiveness continues to be its pool of skilled IT talent, with Polish programmers considered one of the best globally.  This owes to the country’s focus on math and science in the formative years and more students opting for IT programs at universities over other courses.  This is aided by Polish cost competitiveness as compared to other western EU countries.

Further, international IT corporations invest a lot in Polish market creating new working places and inspiring young IT entrepreneurs. Warsaw was chosen as one of 6 locations for Google Campus (opened in 2015). Just few months later, in 2016, Uber opened one of two European Excellence Centers in Krakow.

Of note, Polish and European authorities willingly support innovation in Poland. In 2015, World Bank Group published a report that clearly states that this is one of the most critical issues for Polish economy development. Development of IT and stimulating growth of the ICT sector remains one of driving forces for Poland’s economic growth and competitiveness of its industries. To make this a reality, EU fund allocated to the Digital Poland program for 2014-2020 is EUR 2,172.5 million.

This enabling environment is inspiring potential entrepreneurs to launch startups. According to the Polish Startups Report 2016, there were 2,677 startups in Poland and a good number of them identified its main business as “mobile, e-commerce or software”. Interestingly, majority of these are owned by and employ Polish citizens, reinforcing the faith and outlook towards a digital startup culture. Further, their business value and potential is being recognized by the investment community funding these enterprises. 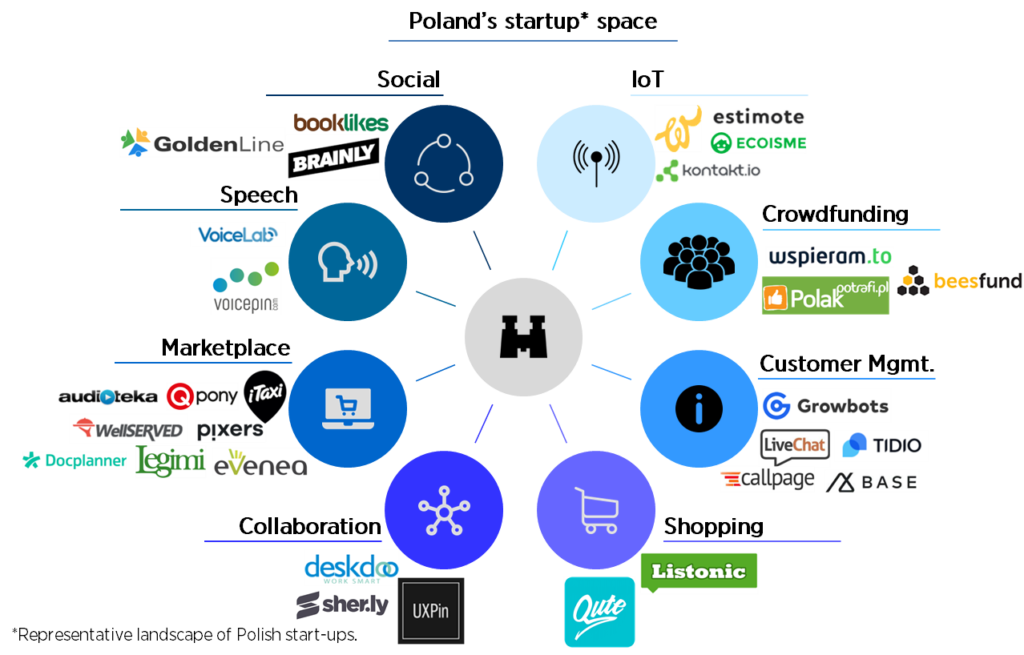 DocPlanner, one of Poland’s success stories, is reported to have raised €15 million in 2017, taking its total funding to ~€46 million and operation to 25 markets. And still others are able to bring the idea to life.

For instance, Michał Gąsior, founder of start-up Qute (quteapp.com) says,“The idea behind Qute is simple: we wanted to change the way people buy clothes and dress themselves. We added the much needed social proof to the process. Thanks to the app there is no more hesitation or wild guessing. It’s a simple A/B test where the global community helps one choose what to wear or buy. This comes from human psychology. We love backing up all our choices – no matter how big or small – with the confirmation of our peers. We need to have our choices acknowledged. The mechanism worked. We managed to acquire over 50 thousand active users in less than 6 months since we launched the app in January 2017. But there’s more to it than just the sheer number of users. People spend over 11 minutes in app every day. Those are Instagram numbers and a bit more than Snapchat. To us, this is success that proves – socially – the insight behind the app was correct and valid.”

Poland’s entrepreneurship space is further supported by the likes of Google that opened its Campus Warsaw, then first in Central Europe, in 2015 to provide coworking space, networking and mentorship opportunities and meeting with potential investors. Should this pace of tech development continue to be supported by the trifecta of government focus and financial support, individual enterprise, and funding and networking brought in by tech players and investment community, Poland may well achieve its goal of creating tech as the new engine of growth.